The Euromast is offering breathtaking views of the city and its surroundings. With 185 metres the Euromast is still the tallest tower of Rotterdam and the Netherlands open to the public. 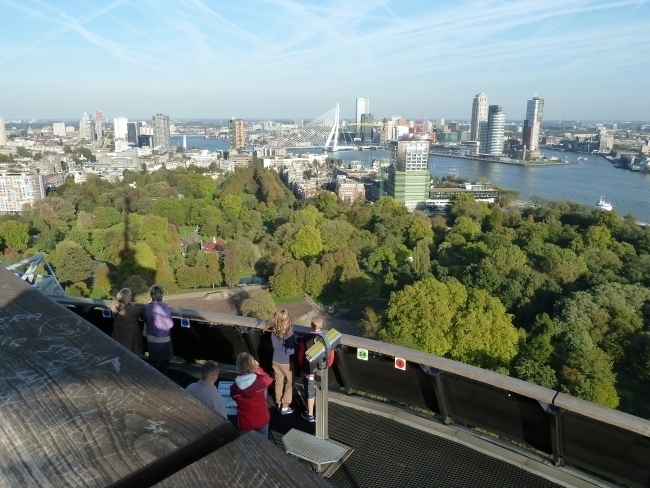 Spectacular views from the Euromast

With a super fast elevator the visitor is reaching the ‘Kraaiennest’ (crow’s nest) in no time. Above you’ll find a lookout platform and a panoramic restaurant. After that the elevator, this time slowly turning, will bring you at the top to the Euroscoop. Above the views are very spectacular: the skyline, the harbours and even The Hague and the North Sea can be seen with some luck.

The Euromast was constructed in 1960 by Huig Maaskant, one of the prominent Rotterdam reconstruction architects. It was built for the agricultural and horticulture fair that was held in 1960. In 1970 the largest crane(145 metre) in the world put a space tower on top of the platform making it again the largest building of Rotterdam.

Zipline and abseil off the Euromast

Do you like some action? Note that you can zip-line and abseil off the Euromast. Reaching speeds of more than 100 km per hour, the Euromast zip-line is the fastest in Europe. Fans of extreme sports must definitely check out abseilen from the Euromast.

Eat and drink in the Euromast

A high tea? That makes sense in the Euromast! At 100 metres in the air you’ll find two restaurants, where you can have breakfast, brunch, lunch or dinner.

The Euromast is open every day.

A guided walking tour or a bike tour?